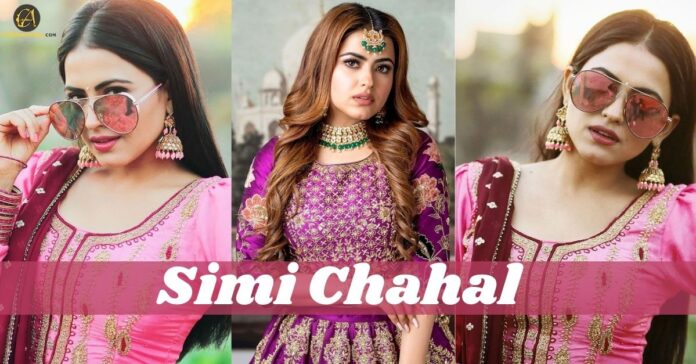 Simi Chahal’s real name is Simarpreet Kaur Chahal and she is an extremely talented and beautiful Indian film actress and model from Ambala. She has mostly been working in the Punjabi film industry in her career.

Simi was born in Ambala Cantt, Haryana on 27th May 1992. She is 29 years of age as per the latest information. Simi has the zodiac sign of Taurus.

Simi Chahal belongs to a Sikh family in Haryana. Not much has been disclosed about her father while her mother’s name is Harpreet Kaur. She also had a brother named Garry Chahal but he passed away on 10th April 2014 due to unknown reasons. Simi likes to paint and dance. She is a non-vegetarian. Also, she has a tattoo on her left arm.

According to Celebanything, Simi Chahal is unmarried and there is no news of her dating anyone right now. Simi completed her basic education from DNMSS in Chandigarh. She completed her graduation in India after which she went to Canada to pursue her double degree. Simi has been an average student during her school time. She never thought of being an actress. She said that if she had not become an actress, she would be a baker by profession. Simi loves to do creative activities. She loves to dance and paint. She also is an avid animal lover.

Simi Chahal Career and Entry into the industry:

Simi began her career as a model and she featured in a few Punjabi songs. She rose to fame by featuring in a Punjabi song named “Guzaara” by Gurpreet Chattha.

Simi tried her hand at acting for the first time in 2016 with a movie named “Bambukat”. It was a Punjabi film where she played the role of “Parminder Kaur ‘Pakko'”. Then, she was seen as “Paali” in a movie named ” Sarvann”. Simi was acting opposite Amrinder Gill in this movie. Simi even had the lead roles in some of the Punjabi movies. These movies are ” Rabb Da Radio” , “Rabb Da Radio 2”, “Golak Bugni Bank Te Batua”, “Daana Pani” and “Manje Bistre 2”.

Overall, Simi Chahal is a very talented and successful model and actress with a few awards in her bag for her amazing performances.