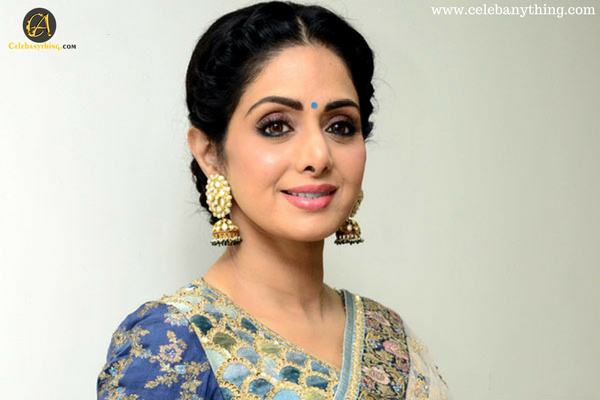 Sridevi was the recipient of five Filmfare Awards.

Sridevi was born in her father’s hometown Sivakasi, Madras state, India to Tamil father Ayyapan and Telugu mother Rajeswari. Her mother was from Tirupati, Andhra Pradesh. Her father was a lawyer.

Sridevi has a sister and two stepbrothers. In 1985, married to Mithun Chakraborty but marriage doesn’t stay long and both parted their ways and got it annulled in 1988.

In 1996, Sridevi married to Boney Kapoor, a film producer who is also the elder brother of actors Anil Kapoor and Sanjay Kapoor. They have two daughters.

In 2013, the Government of India awarded Sridevi the Padma Shri, the countries fourth highest civilian accolade for her contributions to the entertainment industry. Honourary awards were also conferred on her by the state governments of Andhra Pradesh and Kerala

Sridevi, Boney Kapoor and other members of the Kapoor family were in Ras Al Khaimah to attend nephew Mohit Marwah’s wedding. After the wedding and celebrations, while Boney Kapoor and daughter Khushi returned to Mumbai. Sridevi stayed back in Dubai to be with her sister Srilatha.

Boney Kapoor would have been in Mumbai on the fateful day that Sridevi passed away. But Boney instead returned to Dubai with the plan to surprise Sridevi and return with her to India. It was this move to surprise the actor that saw Boney Kapoor at his wife’s side when she passed away. Sridevi died due to accidental drowning.

According to the forensic report, actor Sridevi died due to accidental drowning. Earlier it was reported that she died of cardiac arrest.

Sridevi’s mortal remains will be brought back to Mumbai only after the postmortem and final paperwork are completed in Dubai. A private jet flew to Dubai from Mumbai to carry the late actor’s body. In 2012, she returned to films after a 15-year-long hiatus with Gauri Shinde’s movie ‘English Vinglish’ and was last seen in ‘Mom’ which released last year.

According to reports that will not be her last film as she would be seen in Aanand L. Rai’s ‘Zero’ which stars Shah Rukh Khan, Katrina Kaif, and Anushka Sharma. A few minutes after the news of their demise, many Bollywood actors like Amitabh Bachchan, Priyanka Chopra, Sushmita Sen, Siddharth Malhotra and Riteish Deshmukh, Akshay Kumar and much more expressed their condolences on Twitter.